The term came to life in the 80s and it simply referred to unconventional and cost-effective tactics that a business could use to raise awareness for its brand, idea, service, and/or product. And that’s pretty much what guerilla marketing is all about, even today.

Like other forms of marketing, the aim of guerilla marketing is to achieve the typical conventional goals, such as increased sales and lead generation, but what sets it apart is the unconventional methods it employs, most of which use lots of energy, imagination, and existing resources rather than loads of money to make a statement or inspire mass participation. 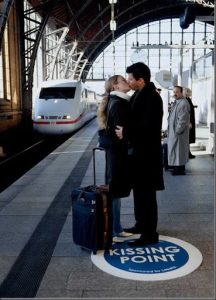 Labello Lip Balm’s Kissing Point in which a spot was provided for the audience to part from their loved ones with a goodbye kiss. The train station Kissing Point below is a famous example.

With such an ad, participants are likely going to take photos and share on social platforms, which could have a positive effect on your brand. Should you create such a campaign, it’s best if you come up with a hashtag that those who get involved could use.

Video stands out as one of the best tools today due to its potential. This is evident in many statistics, some of which state that nearly 50% of internet users scout for videos related to a product or service to watch before they visit a store.

Those that emerge successful mostly utilize technologies such as video personalization, which is a creative way to surprise and delight your viewers. Compared to other guerilla marketing tactics, most of which require time, energy, and plenty of resources, videos that incorporate this kind of technology provide a more convenient way to get the attention of an audience.

Think outside the box and expand your reach with techniques such as the use of videos that incorporate video personalization technologies, not forgetting to mention that they perform well in attracting the attention of an audience.

Above everything else, with guerilla marketing, there’s no limit to your creativity. And despite the risk that an idea may fail to work, you won’t have much to lose, besides the fact that your brand could suffer. However, should your idea work, you stand a chance to reward your brand with a level of exposure not possible to acquire through any of the other ways.